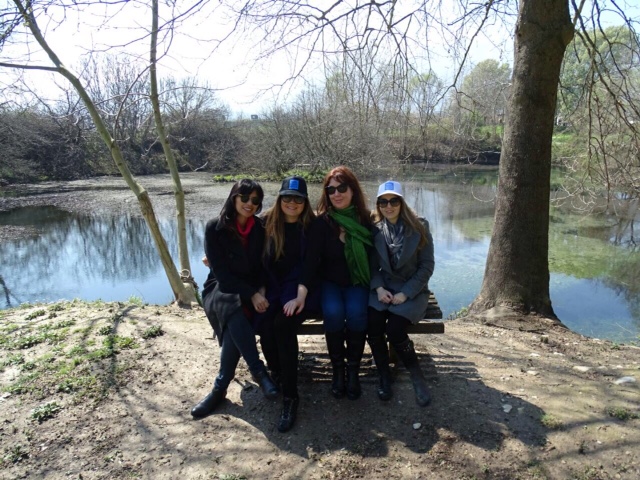 The Chamber of Piera invited us for a familiarization trip the third weekend in March, and it was fabulous. Pieria is in Northern Greece – the region of Mount Olympus. It had everything- mountains and seashore, ancient history, contemporary pleasures, cosmopolitan restaurants, and rustic charms. And wines- lots of wines. They were generous, enthusiastic hosts. 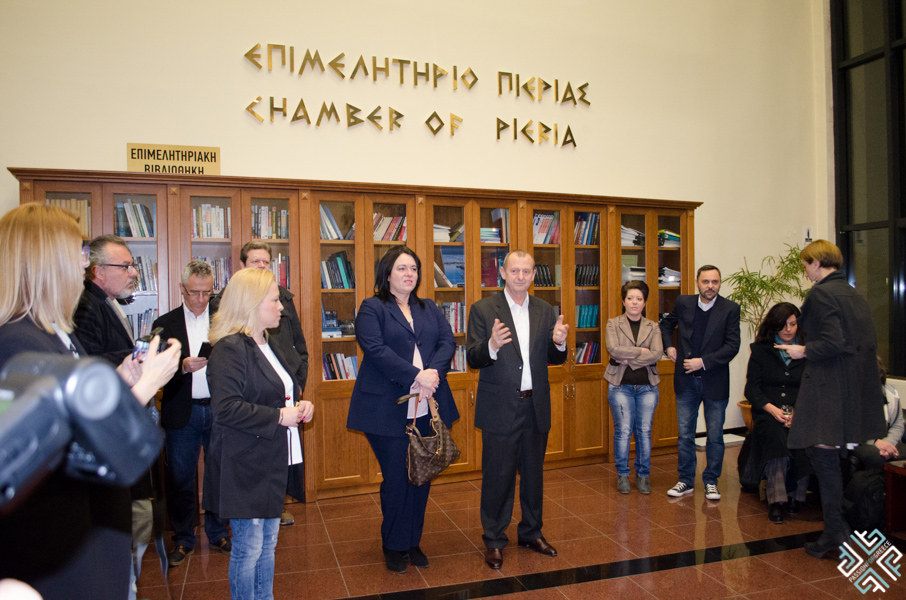 We were put up at a five star beachfront resort- the Mediterranean Village- spas, bungalows, palm trees everywhere, and an endless pool with islands and bridges that made you want to be 8 years old. Or be grown up, and have cocktails next to it. 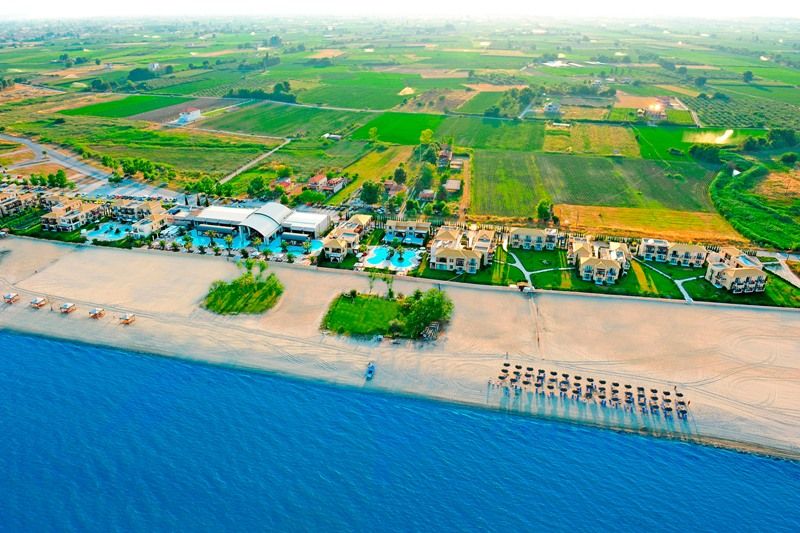 We arrived on Friday evening, along with another 60 or so guests- it was a huge event, beautifully orchestrated. We  were greeted with a gift of the region’s products- wine, honey, herbs and country-style pasta- it hit an authentic note- the same rustic/chic the region embodies- elegant without pretension. We first went to the chamber of Pieria itself for a warm welcome, then some of us went to dinner, and some to a winery. We were in the lucky second group. 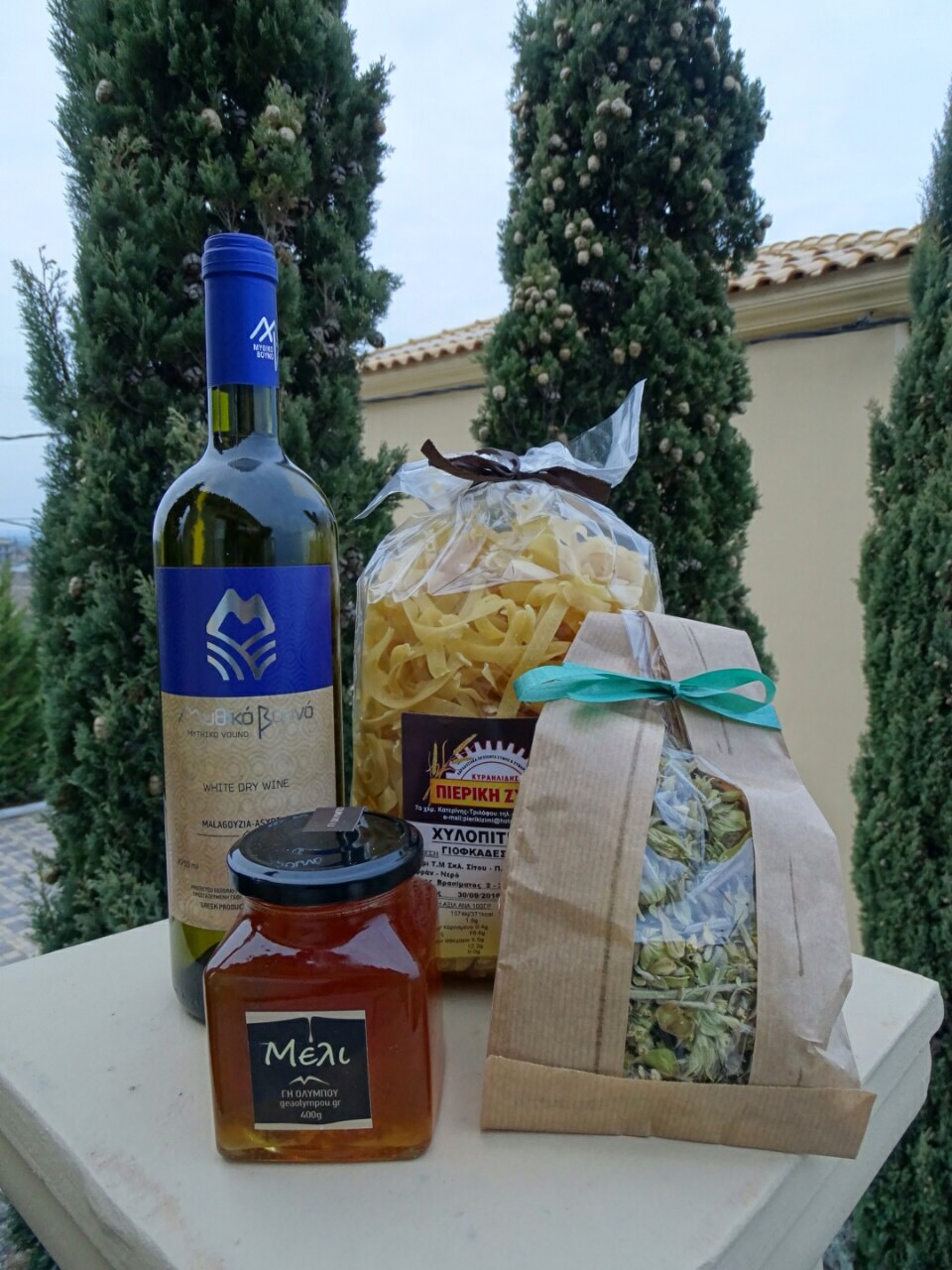 Kourtis winery is high in the mountains. We took a narrow winding road in the cool moonlight and ended up in a stone village- actually, just a couple of houses and a streetlight. Apostolous Kourtis has an enchanting, picturesque winery. 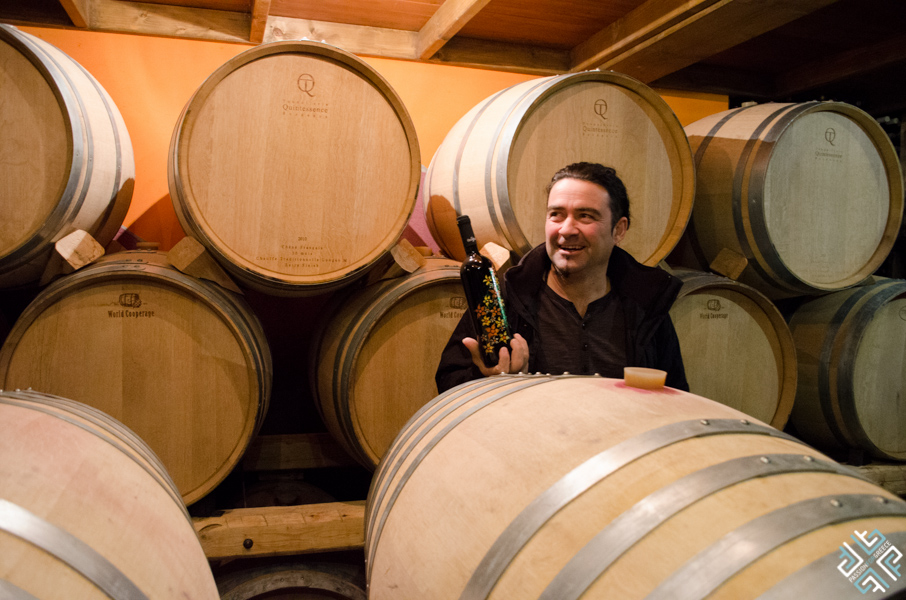 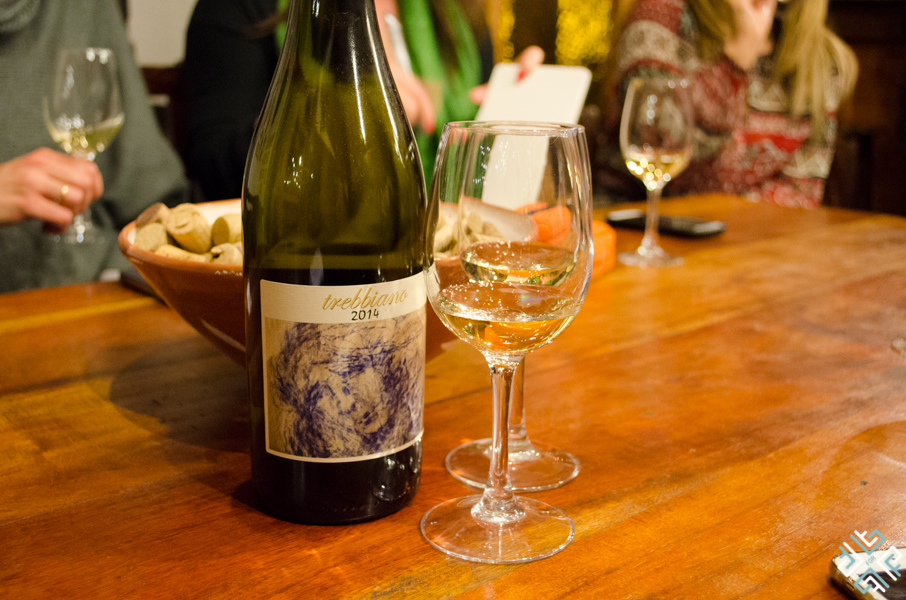 We toured the Cava, had a tasting, and went back to Katerini for dinner, at Boukia kai Goulia (“a bite and a sip”). I  had heard about it- people from Thessaloniki for a night out. The food was great- regional re-imagined for that same unpretentious elegance that marked the weekend. Each course had a wine pairing, and better still, a vintner himself to go with it. Our pens and notebooks were out the whole time- and we really enjoyed the wines more for knowing about them. 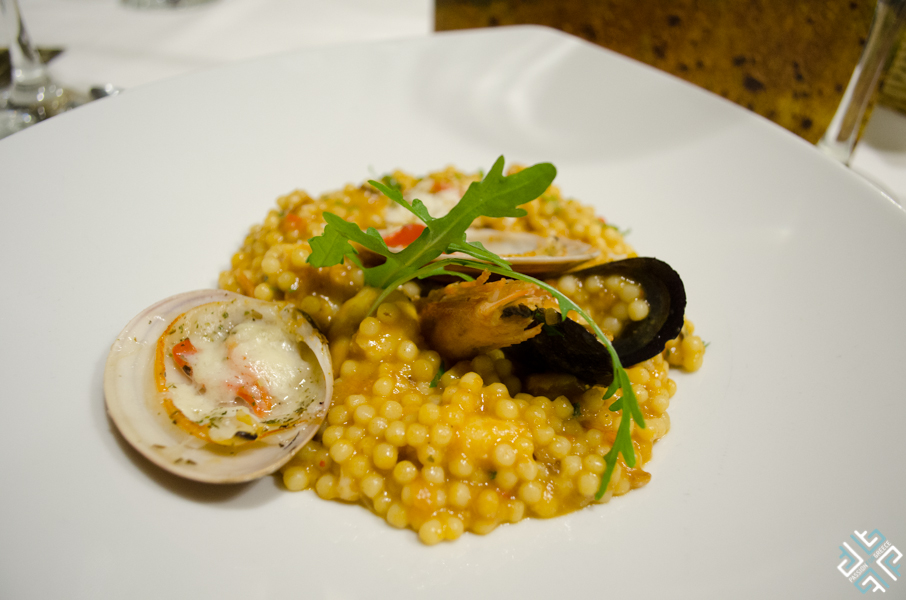 The next morning started at the region’s crown jewel- Dion- Sacred site of Ancient Greece, with a rich Museum and a vast excavation. We wandered through the site, seeing statues among the wildflowers, sacred waters teeming with fish. 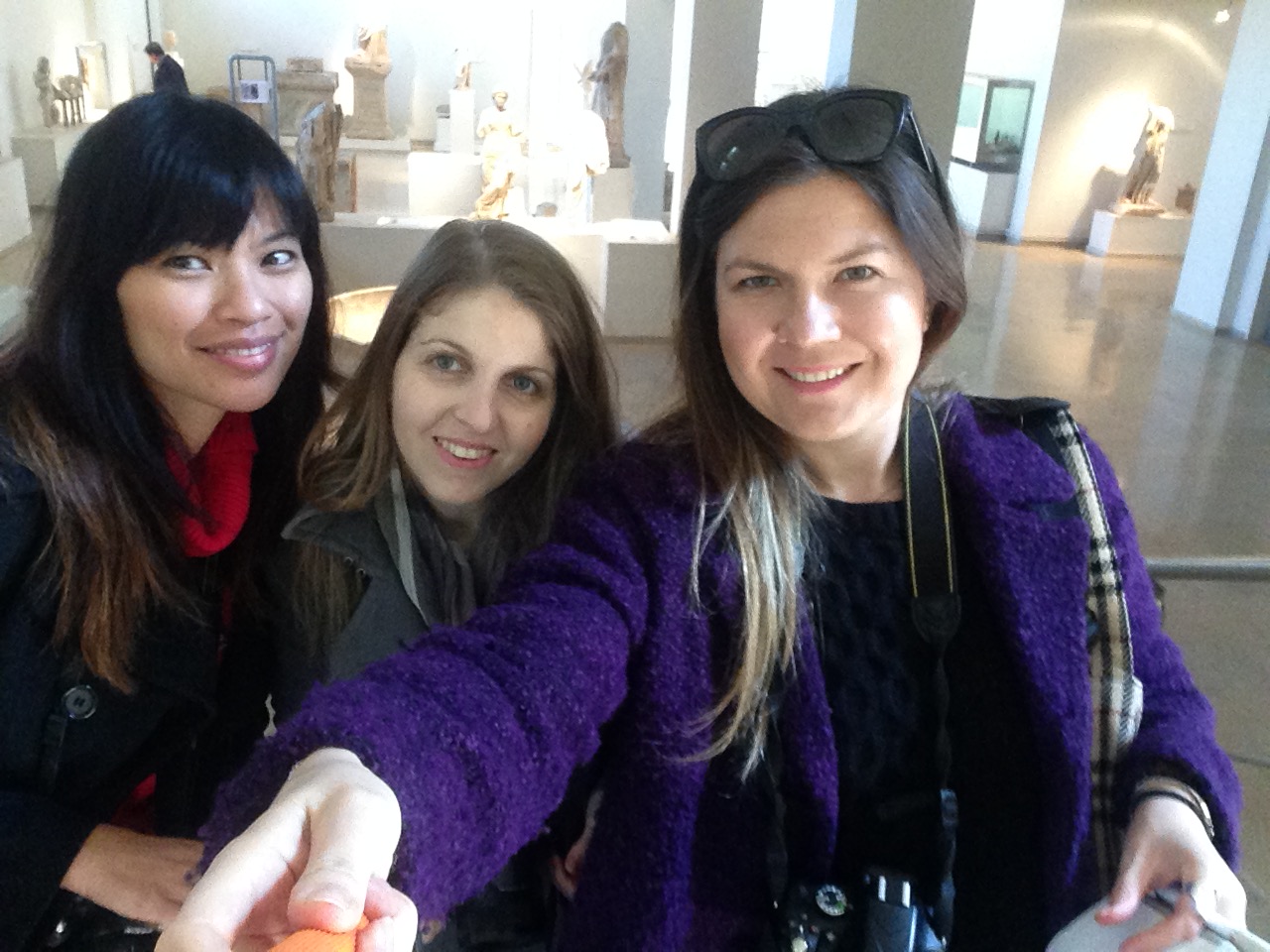 Exploring the Archaeological Museum of Dion with Marissa of Mygreecemytravels.com, Chrysoula of Travelpassionate.com and Elena of Passionforgreece.com

TBG at the Archaeological Park of Dion

From Dion, we went to a Monastery. The monks were surprisingly lively (one-liner, stand-up lively), and greeted us with coffee and pastry.  Their Church was new- sadly the original one was destroyed in WW II-but their treasures were old- we got to see them at the museum. Very rare and fine icon, filigree crosses, and… some unmistakably Islamic furniture. Why? Ottoman occupation, Ottoman craftsmen making Christian Bible stands. (The Church had a throne in the same style- that was new- they ordered it from Egypt because they liked it). 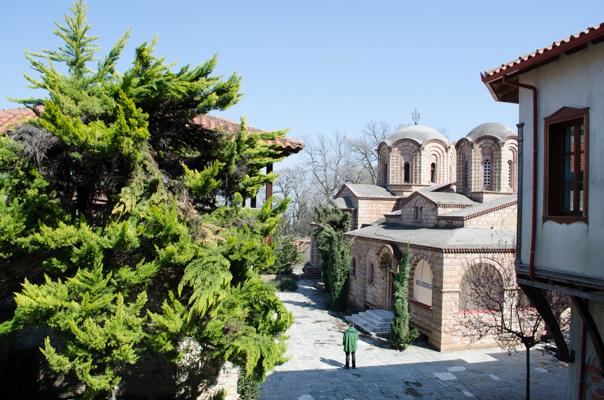 After this, a Naval Museum. The town of Litohoro is at the very foot  of Mt. Olympus, but close to the harbor, and a huge portion of the town worked on the ships. The captains’ union maintains an excellent Museum- artifacts, machinery, history and ephemera. 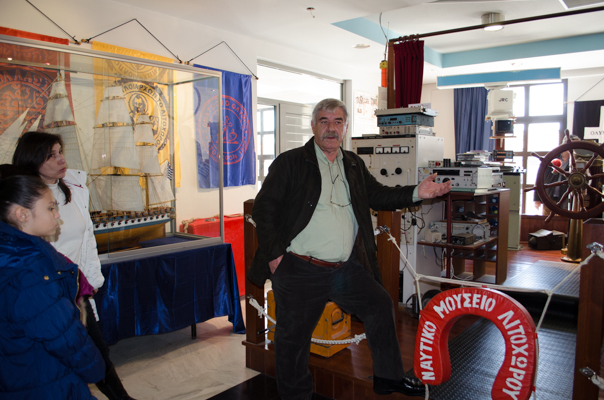 Litohoro has a laid-back cosmopolitan mood. Across the street from the museum is a serious much-awarded restaurant Gastrodromio. Chef Andread Garvis gave us a fresh view of classic things. The main course? Mature goat- the most rustic and least fancy of meats- gamy, tender, and delicious, on a bed of sweet trahana- as if polenta were reinvented in a Greek mountain village. This honest use of conspicuously humble ingredients enchanted us. As with the previous nights’ dinner, the wine makers were there helping us enjoy the pairings. 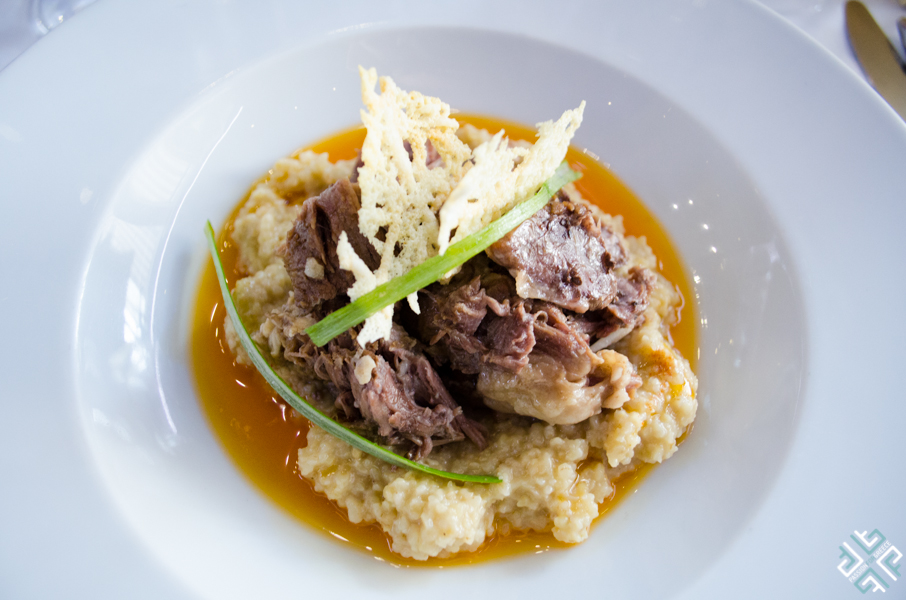 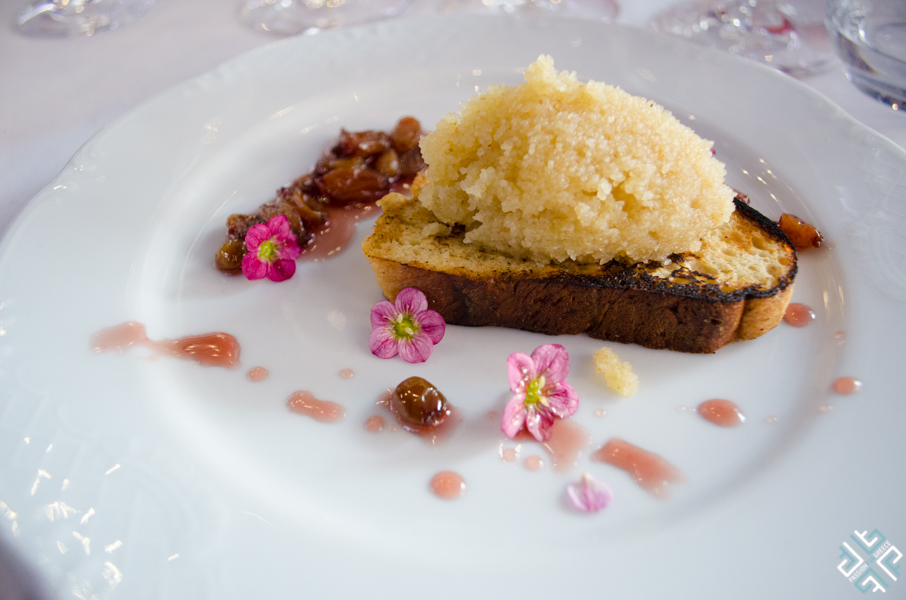 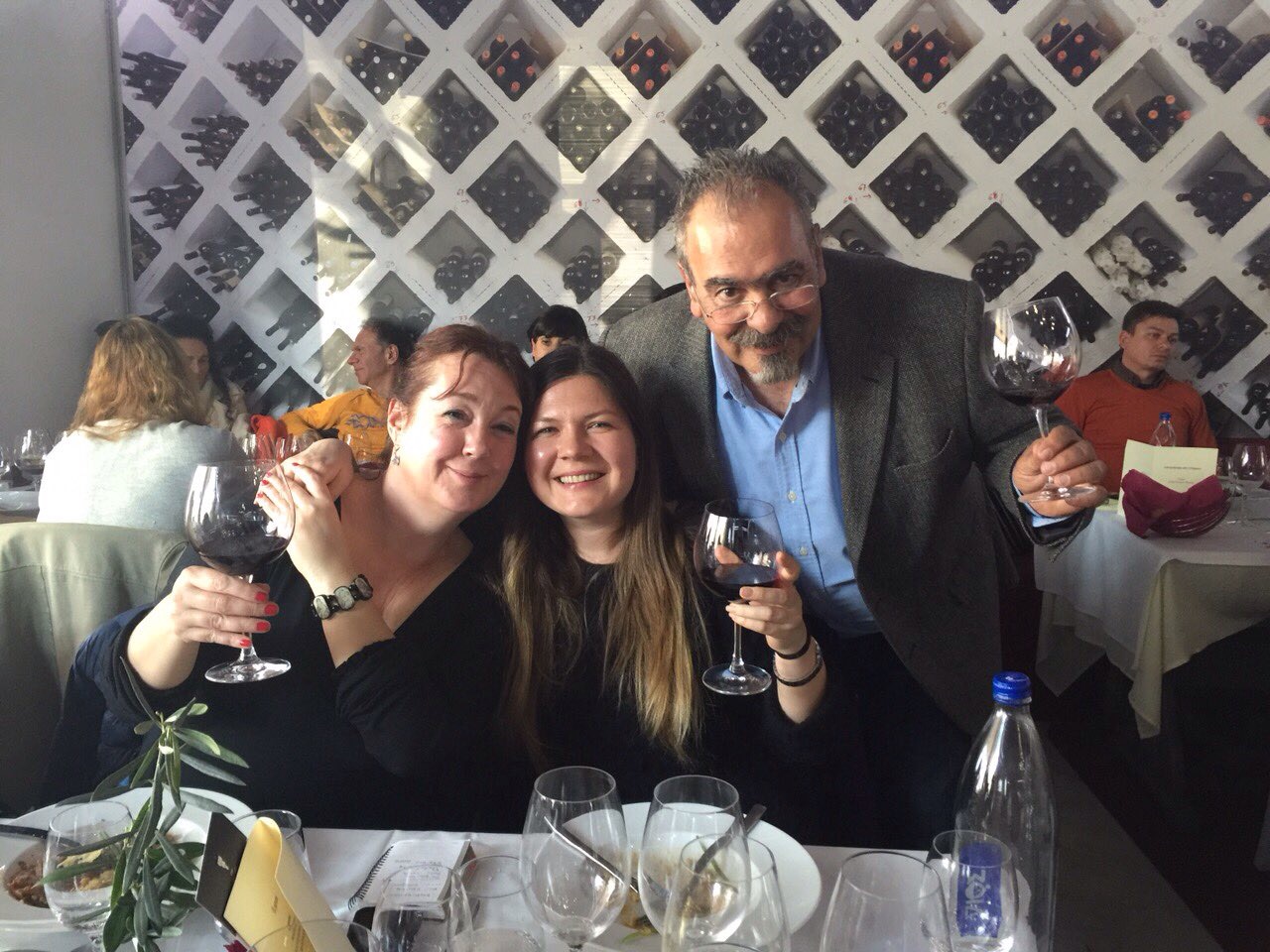 Amber of Provocolate.com and Elena of Passionforgreece.com meeting the wine makers of the region

We left hours later, in excellent spirits, and in want of an espresso. Cafe Liagas hosted a small group of us- we had short hot black foamy espressos just like in Rome, enjoyed a great collection of artwork, and  perfect chocolate cake. We ducked outside just in time to see the snowcapped peak of Mt. Olympus turn lavender, and found Litohoro a mountain village with a metropolitan vibe- a beautiful place people do not feel they have to leave behind in order to live their destiny.
Much later that night, there was a grand formal banquet at the hotel- octopus carpaccio 9delicious), and an achingly tender lamb steak. Everyone was dressed up, glowing in the candlelight, flushed with the excitement of the day. 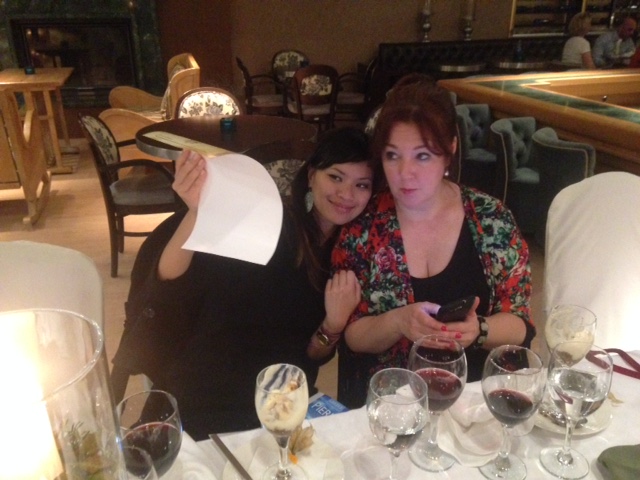 Caught it action, Marissa and Amber tweeting and discussing the dinner menu

After a relaxed hotel breakfast (a beautiful buffet of every imaginable thing), we sai goodbye to our plush rooms and got on busses for Old Panteleimonas- a classic village that had slowly been abandonnedover the years and then revived starting in the 1980’s with the help of funding. this has been a tasteful revival- materials and style strictly adhered to, picturesque crumbling stonework overgrown with wildflowers, and that same Pierian element of rustic chic in the cafes and restaurants with their views of the bay stretched out far below. The Church in the town square with its floor of patterned tiles and white walls (unusually spare in an Orthodox Church) had an icon of St. Panteleimonas that was covered with tamas of thanksgiving. Outside, boys played ball next to an enormous plane tree, anchor of every self-respecting town square in Greece. 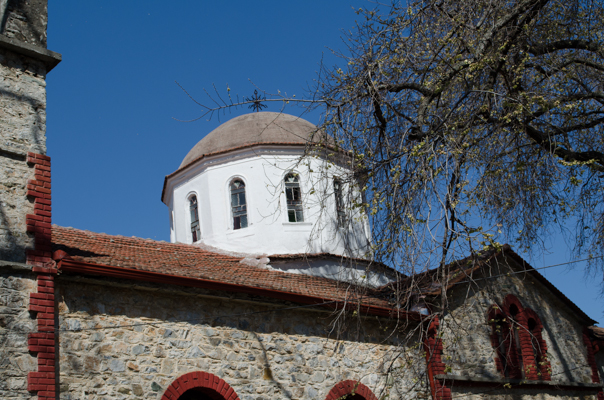 We hated to leave, but had a farewell lunch to attend. Wha a contrast- from the cobbled red-roofed mountain village, to the Cava Olympus- a newly built grand resort that was a temple of spare modernism. After the charm of the village you would think it would be a risk- but the place was anything but cold. it has the lines of a church, the textures of Louis Kahn, and the warm light of the Mediterranean. Lunch, again with its wonderful pairings and the vintners we had come to know, was fabulous. It was lovely to be at the table once again with the new friends we  met here, and share our impressions. So much culture, history, art, fine dining and those wines, and the first thing on everyone’s lips? How much we liked the people of Pieria- warm, elegant, hospitable, the best part of their beautiful region. 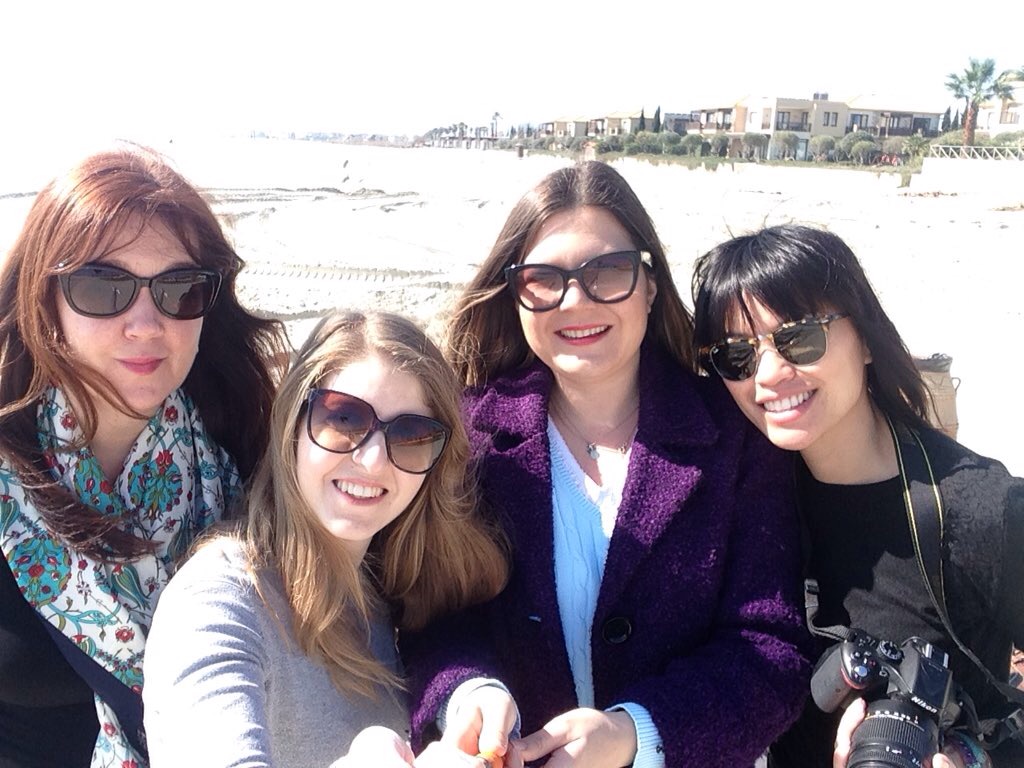 Close
We use cookies to ensure that we give you the best experience on our website. If you continue to use this site we will assume that you are happy with it.OkRead more